Criminals are a special Interest Group, and SB10 empowers them by having us fund their deeds.   The  goal seems to be to make crime affordable for everyone in California!  Has common sense been lost on our  leaders? SB10 eliminates the Bail industry and shifts the cost from the attacker to the victims and taxpayers. If it passes, victims of crimes and law abiding citizens will cover all cost for Legal Counsel, trials, warrants, court fees, and fugitive recovery cost with additional taxes. Currently Bail Agents bear this responsibility.  It will make California a fugitive state. SB10 has been marketed by (D) Senator Bob Hertzberg,  (D) Assemblyman Rob  Bonta and the ACLU with a variety of spin marketing  tactics and guilt videos in order to gain support. Minority children are marched out with signs with the theme "poverty is not a crime." We agree poverty is not a crime--stealing, abusing and molesting are crimes, and low income families are equally victimized by these criminals.

Bail reform protects the bottom line of criminals that take advantage of the most vulnerable. Here is a short list of crimes and groups that benefit  from SB10 Bail Reform

Bail Reform covers these criminals under the mask of "Poverty is not a crime". These people are not poor. They are well funded by their crimes. The advocates of this bill would have us believe that poor people commit these crimes. Poor people don't commit crimes. Criminals commit crimes.

The CA. Senate  sent  a message to criminals across the country when it voted to pass SB10 Bail Reform. Crime Pays! Senate Vote  If you are currently struggling with crime in another state, come to CA.  We will create the ideal atmosphere to support your  activity.  We will pay for your defense  and ensure no jail time.  Californians are so wealthy they can afford to be victims, and we are willing to pay top dollar for crime!
There is no accountability  under SB10 for criminals to show up in court or for law enforcement to bring them in. It solves nothing, it emboldens criminals, and it puts citizens and law enforcement at much greater risk.

This is happening very quickly. Contact your Assemblyman or Senator  TODAY.  Encourage them to vote against Bail Reform and those who are failing to protect the most vulnerable in our state...us. 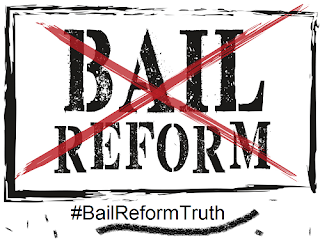